Waiting for the super capex upcycle – Are expectations justified by the data?

Capex cycle is one of the most important economic trends one needs to track in the macro space as it is a critical ingredient in order to achieve a higher trajectory of economic growth in later years. Making capex decisions are usually very complex. These decisions require a fair degree of long-term demand-supply estimation, advanced planning of funding and assumptions galore on the likely trends primarily in the market place for a large part of the decade to come. It requires the animal spirits to come alive driven by the need to time expansion or entry to gain an edge over other entities in the competitive matrix.

Predicting the capex cycle thus is even more complex as it deals with delta of the capex of the government and all private/household entities. It is fraught with capricious factors causing for instance many of the predictions over past 5 years ending up getting revised time and again.

Given the vagaries of trying to predict the timing of the capex cycle we would prefer to rather test the conventional perception of the capex being weak. We will also attempt to run a reality check on a reasonably healthy expectation of the next upcycle being as strong as the one seen over FY03-08. In the process we touch upon factors which possibly led to this super capex upcycle and the current state of these factors.

Deviation from long term trajectory - Are we that much off the road from the past?

The Central Statistics Office publishes the gross fixed capital formation (GFCF) which is a summation of the capex in the economy. India’s nominal capex grew by 13.7% in FY19 to Rs. 55.70 trillion. But we prefer to use the real capex growth for our discussion so as to make a comparable study of capex trend over the past six decades. Using the constant currency GFCF, real capex growth for FY19, over the past three years and the past six decades were 10%, 9.1% and 6.8% respectively.

In our analysis, a decisive uptrend in the capex cycle can be marked only if the real capex growth is more than 7% (long term average of 6.8%) for at least 3 out of 5 consecutive years. Based on this threshold, past data suggests, India has witnessed 6 capex uptrends since 1952 (the first uptrend was boosted by the PSU investment-focussed second five-year plan of 1956; the share of private in capex was just 8% in FY54). Out of these, except for first and fifth upcycle, real capex CAGR stood in the range of 8.7-10.3%. The fifth capex upcycle (FY03-08) witnessed real capex CAGR of 16.1% and was driven by the private sector. We therefore call this fifth capex upcycle the super-capex upcycle 2.0 and the only one yet to be driven by animal spirits given the key role played the private sector.

Source: CSO, AnandRathi research, Note we include PSU capex in public as there is a thin line between PSU capex and government capex over a long period of time; household generally include resident household, non-profit institutions and most of the unregistered micro, small and medium enterprises (MSMEs); we use the same deflators for constituents of GFCF as are built in GFCF. We calculate deflators for GFCF by comparing constant currency data with nominal data.

Let us focus on the super-capex upcycle 2.0 as real capex CAGR in it was nearly twice of almost all the earlier capex upcycles. As discussed, private participation was a significant contributor with private real capex growing at a CAGR of 32.7% over FY03-08, an unprecedented high (yet to be surpassed to date). Capex upcycle I was public sector led. Capex Upcycle II was led by private and public at similar but moderate pace. III, IV and VI were led by household capex; both private and public participation were weak.

Recent capex trend has been healthy. India’s real capex growth accelerated from 8.3% in FY17 to 9.3% in FY18 to 10.0% in FY19. This growth trajectory is similar to the average of previous upcycles. It also meets the threshold of our capex upcycle definition. Consequently, we believe we are already in capex upcycle VII. However, the important question is whether the animal spirits exist to convert it into a super-capex upcycle 3.0 as equity markets await a further uptick. Before we answer this question, let us analyse the peculiar features of super-capex upcycle 2.0.

Often capex has a multiplier effect. Capex in one sector translates into higher demand for its vendors triggering capex for another sector. Intuitively, if the first level capex is in heavy industry with multiple capex vendors, then the multiplier effect is understandably likely to be stronger.

If we look at FY03-08 upcycle, the first level round of capex was triggered in the core industries such as metals, oil and gas, telecom, power and road due to following factors:

Global liquidity and aggressive credit stance by public as well as private financial institutions in India supported the capex aspirations of private entrepreneurs.

What can spark super capex upcycle 3.0?

From the earlier discussion it is clear that public capex is relatively steady (growth range has been 2.6%-12.3% over past upcycles) vs private. Hence, public capex on its own cannot lead to a super-capex upcycle. Consequently, the onus of super capex 3.0 will have to fall on private and household capex.

In the private, we first look at heavy weight sectors which triggered first level capex over FY03-08. At the current juncture, it seems certain that India may need to look at new heavy weight sectors to trigger super capex upcycle 3.0. Though metals and oil and gas sectors have witnessed fresh capex announcements in past years, the global cycle is still out of favour. The capex phase in the domestic telecom sector seems well behind us with heavy consolidation and stretched balance sheets. The multiplier effect of the power sector is declining as we move away from thermal to renewable (number of Indian vendors going down) power. Road is the only sector from above discussion which is in a bright spot given the government thrust on the Bharatmala project. On the export front, global demand continues to be weak. Though there may be potential for India to gain out of the US-China trade war, we will have to leave the debate, on whether can India step into China’s shoes, to some other discussion.

Let us look at other large sectors which can potentially trigger first level of capex:

Super capex upcycle 3.0 thus requires a “stepfunction” rise in capex to GDP. However, the luxury of a low base of capex to GDP is not available at this time. We ran a scenario-analysis to see the capex to GDP outcomes at various magnitudes of capex growth till FY25.

Interestingly, if India’s real GDP grows at 7% CAGR over FY19-25 and real capex CAGR outcome is similar to super-capex upcycle 2.0 at 16% then exit capex/GDP in FY25 should be 47.6%. Achieving such capex to GDP will be challenging as no large country has ever achieved such capex/GDP in the past 5 decades. (We will compare India’s capex cycle with global capex cycle in another discussion at a later date.)

Source: AceEquity, Ambit Capital, Note – we have split the capex of the largest oil and gas company for FY18 into the end sectors; we have reduced spectrum payment and international capex from telecom capex

Exhibit 13: Limiting factors to the analysis - Data which we would have loved to analyse 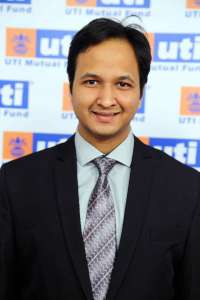 Deepesh Agarwal
Mr. Deepesh Agarwal is an Associate Vice President and research analyst in the domestic Equity Division of UTI Asset Management Company Ltd. He tracks the Capital Goods, Infrastructure and Textile sectors. Deepesh joined UTI AMC in its equity team in 2017, prior to that he worked with Ambit Capital as equity research analyst for 4 years. He has also worked with Hexaware Technologies in Corporate Finance for 2 years. He is a Chartered Accountant from the Institute of Chartered Accountant of India and has cleared the Level 3 exam of the CFA program conducted by the CFA Institute, USA.